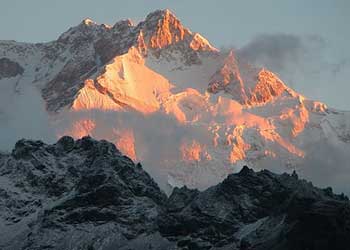 It was first climbed by G.Band, Evans & J. Brown in 1955. In keeping with its name "five treasure houses of the great snows" the Kanchenjunga Himal is a grand collection of shapely spires. It is unique in as much as it is buttressed north and south as well as east and west by mountains of equal stature. This multi-topped massif comprises of four summits. Main Summit, Middle Summit, South Summit & Yalung Kang or West Summit, each one measuring over eight thousand meters.

As way back 1848/49 one of the greatest of British botanists. J.D. Hooker, made two commendable trips to make an almost complete circuit of the Kanchenjunga range. The came within twenty two kms of the peak itself. But it was only in 1955, more than a century later, that a British expedition finally made its summit. There are four different routes to the mountain peak with both its south and east side providing opportunities for new routes. It is believed that the east flank of the South Summit is by far the most difficult face route.

Kanchenjunga is the third highest mountain in the world. It is an enormous mountain mass, and many satellite peaks rise from its narrow icy ridges. It is located on the border of Nepal and Sikkim, just 46 miles northwest of Darjeeling. It is the most easterly of the great 8,000 meter peaks of the Himalaya.
{tab Trip Highlights}

Day 55 Cleaning up Base Camp.