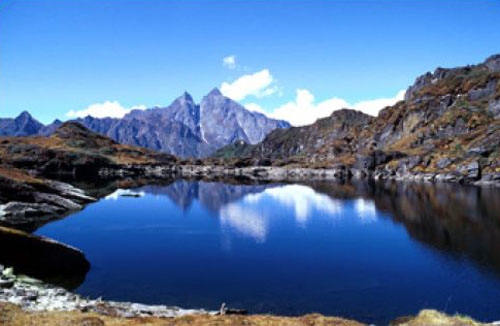 Trekking in langtang and Gosaikuanda trek is one of the most beautiful trekking in Nepal Langtang is a narrow valley lies south Tibetan border. This is very popular for similar, with Tibetan and Taming ethnic group whose culture which, religious, language and dress can see beautiful mountain view of Langtang Gang Chhenpo Naya Khagri Ganesh Himal , Tibetan renges andother ranges. We drive to Dhunche[6400 feet ] and trek north from the road and head in to the proctead pine and rhododendron forest of Langtang National Park . It is high valley open way to streams, yak pastures, glacier morine and Buddhist monasteries. Gosaikunda is lies 4300mt..It is holly lake for hindu If any body they like to explore this area can found 108 lakes. Thousand of Hindu and Buddhist pilgrims visit lakes during the full moon festival in August and from Laurebinak can see beautiful view of Annapurna, Manasalus,Ganesh Himals, Tibetan ranges and Lamtang .Helambu area can found Sherpa but different then Everest Trek. they are know as Helumbu Sherpa which have a different culture and languages .Also from this area you can see nice views of many mountains .Different type of flora and funa can find all given Areas. One can catch a bus to Trishuli Bazaar from Kathmandu and from there again drive down to Rasuwa headquarters Dhunche and then to Syabrubesi from where the trek begins.