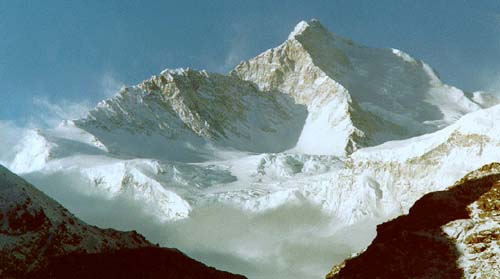 World fifth highest mountain is Mount Makalu 8463m. Mount Makalu is in the Himalayas, 12 miles (19 km) southeast of Mount Everest, on the border between Tibet and eastern Nepal. This mountain is a very beautiful but extremely challenging, and potentially dangerous mountain. Hardly more than 200 mountaineers have stood on her summit - Mount Makalu should be treating with the greatest respect. Mount Makalu was first climbed by a french people in 1955. By 1996, 160 climbers had reached the summit on 125 expeditions;15 climbers have died in the attempt. The peak was first mapped and photographed from the Tibetan side by the 1921 British Everest reconnaissance. Hillary and Shipton photographed Makalu during a side trip on the 1951 Everest reconnaissance. Hillary and other approached the peak a year latter after the failure of their Mount Cho Oyu expedition. The first attempt on Mount Makalu was in 1954 by a US team, mostly from California, who trekked all the way from the Nepal - Indian border near Biratnagar.