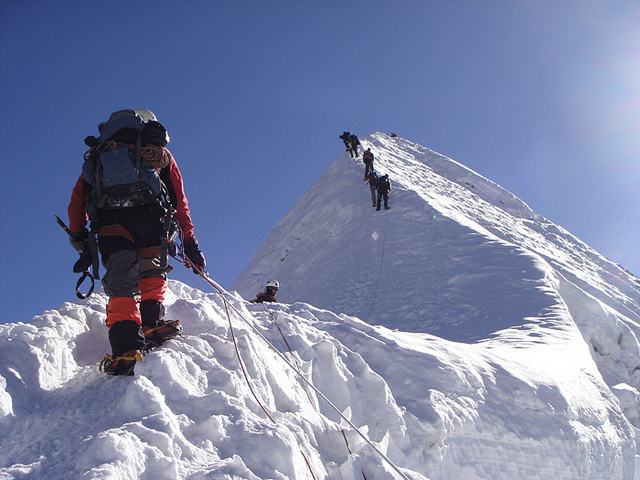 The Nepal Mountaineering Association (NMA) has classified 33 peaks in Nepal as 'trekking peaks', a misleading name because all involve climbing. Ranging from 5650-6500m (18,537-21,325ft) some are, however, appropriate heights to combine within a trekking program. "Limited bureaucracy" peaks would be a better name.

The NMA trekking peaks list was revised with 15 peaks added and all the new peaks classified as group "A" peaks while the previous 18 are now considered group "B" peaks. Little is known about many of the new peaks.

Also a new "garbage deposit" scheme is being set up for all 33 peaks. Currently $250 per team must be deposited and will be refunded if the climbers, sirdar and leader sign that they have left the base camp clean, however this method will be revised sometime.

Heading straight up to high altitude for the first time, even if following the recommended guidelines, is usually a shock to everyone's system. The effort required for walking, let alone climbing, uphill at 5000m is much greater than you might think. So a sensible acclimatisation program is essential: use the 300m a day rule, not only to avoid altitude sickness, but to give your body time to gain strength. Almost invariably a trek itinerary with a couple of days thrown in for a climb doesn't lead to a successful ascent. Plan the trip as a peak expedition, with the trek in and out as a means for acclimatising and getting fit.

Quite a few people want to try a peak without any sort of support, carrying all their own gear. Mostly this isn't entirely realistic. It is much better to hire at least a porter or two so that you can enjoy the trek. However the best reason to take a climbing sherpa or at least a porter-guide who speaks English is for route-finding. None of the trails are marked, and the routes on the mountain are not