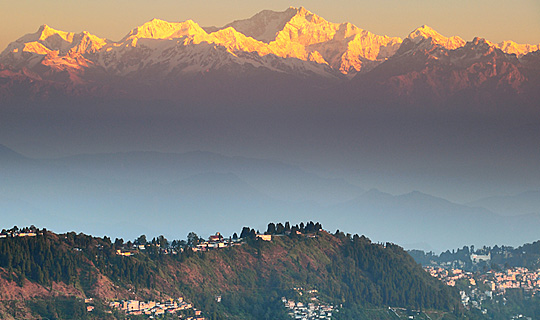 Day 1
Pick up Bagdogra/NJP drive Gangtok, 126kms, and 4 hours.Bagdogra is the nearest Airport where as NJP (New Jalpaiguri) is the closest Railway Station to Sikkim. Drive to Gangtok passes through a lush green vegetation adjacent to it river Teesta flows in a vibrant current.

Day 2
Tour around Gangtok including Rumtek Monastery, Flower show, Hanuman Tok, Institute of Tibetology, Tashiview Point, Chorten Stupa.Rumtek is one of the biggest monasteries in Sikkim, which was built in the year 1960 by His holiness 17th Karmapa who fled Tibet due to Chinese aggression. Flower Show houses large number of flower as well the ornamental plants of Sikkim. During the flowering season, exhibitions and competitions are held here. Sikkim has around 4000 species of flowering plants. Hanuman tok situated at hilltop has a Hanuman Mandir and during the clear weather Kanchendzonga range can be view at its best. Institute of Tibetology houses large number of Buddhist scriptures as well acts as museum. Tashiview point provides an excellent view of Mount Kanchendzonga and far-flung North Sikkim Villages. Telescopic view of mountains is available. Chorten stupa is situated near Tibetology.

Day 3
Day trip to Tsongo-Babamandir/Nathula Pass. Tsongo Lake, Babamandir and Nathula are situated in high altitude area. Tsong is at 12400 feet, Babamandir app. At 13000feet and Nathula is at 14600 feet. Tsongo Lake is an alpine lake with lots of rainbow trout though it is a sacred lake of Sikkim. Visitors are not allowed to do boating and entering the lake. Baba mandir is situated much higher with a mandir established and maintained by 17th Mountain Brigade. Baba Harbajan a soldier who perished in a gushing river in 1960 re surfaced to protect the border of Indo-China. Nathula pass is gateway to Tibet and before Chinese aggression this used to be only a silk route to Lhasa. Nathula to Lhasa is only 470 kms. In near future this route is being re- opened to start Indo-China Trade. Gangtok to Tsongo—Baba Mandir drive is one of the most interesting as it provides an altitudinal changes along with the vegetation changes. During winter the region is full of snow. Nathula is opened for visitors on the following days: Wednesday, Thursday, Friday,Saturday and Sunday. Tour has to be organized by recognized local travel agent.

Day 4
Gangtok drive Pelling. Pelling new tourist destination, which has sprung up to feed the west Sikkim tourism circuit. Pelling provides excellent view of Kanchendzonga range. Khechuperi lake which is about 13km from Pelling is yet another sacred lake of Sikkim. It is believed that once you visit the Lake and wish in your mind will be fulfilled. The Lake is in the shape of a Buddha’s foot and all around rich forest cover guards the habitats. Lake provides shelter to large number of birds.

Day 5
Tour around Pelling including Rabdentse ruins, Pemayangtse Monastery Rabdentse palace ruins are covered with thick forest. It was the second capital of Sikkim before shifting to Tumlong later to Gangtok. Pemayangtse monastery is the premier monastery of Sikkim. View of mount Kanchendzonga is at its best.